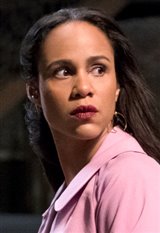 Born in London, England, Zawe Ashton graduated from the Manchester School of Theatre with a degree in acting. Her T.V. debut began at the age of 11 on the British Television series Game On (1995). She has had numerous television appearances over the years on shows such as Doctor Who (2014), Wanderlust (2018) and The Handmaid’s Tale (2021). In 2011, Zawe appeared in the British thriller Blitz as Elizabeth Falls.

She is best known for her leading role as Violet Nordstrum on the sitcom, Fresh Meat (2011-2016) and Katherine on the comedy series, Not Safe for Work (2015). In 2016, she starred in Tom Ford's Nocturnal Animals. Zawe is expanding her resumé with the main role of Julia Thistlewaite in the period drama, Mr. Malcolm’s List (2022).

Zawe was featured in the Fall 2022 issue of Vogue magazine. In her newest book, Character Breakdown (2019), Zawe dives deep into her acting career to tell the story of her life.

The actress also has much experience acting and writing in theater. She most recently starred in the play Betrayal (2019), where she met her fiancée and fellow actor, Tom Hiddleston.