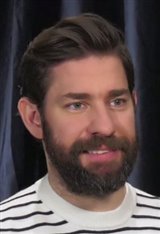 The Newton, Massachusetts native graduated from Brown University as an honors playwright and later studied at the National Theater Institute in Waterford, Connecticut. He adapted David Foster Wallace's book Brief Interviews with Hideous Men into the independent feature film of the same name, which Krasinski also directed. The movie stars Julianne Nicholson opposite, among other men, Dominic Cooper, Timothy Hutton, Max Minghella and Lou Taylor Pucci.

Among John's other feature films as an actor are George Clooney's Leatherheads, Bill Condon's Dreamgirls and Kinsey;, Ken Kwapis' License to Wed; Nancy Meyers' The Holiday, Christopher Guest's For Your Consideration and he also provided the voice of Lancelot in Shrek the Third and the voice of Cuthbert in Monsters vs. Aliens (2009). He played a slick environmentalist alongside Matt Damon and Frances McDormand in the 2013 drama Promised Land.

With his wife as his co-star, John not only acted, but directed, executive-produced and co-wrote the screenplay for the critically acclaimed movie A Quiet Place (2018). They teamed up again for the sequel, A Quiet Place Part II (2020) which John again wrote, directed and executive-produced, in addition to reprising his role in flashbacks.

John also has a hit on his hands with the series Tom Clancy's Jack Ryan, in which he plays the title role. It has so far enjoyed two successful seasons on Amazon's Prime Video streaming service.