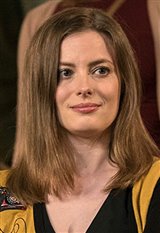 American actress Gillian Jacobs made a name for herself as outspoken hipster Britta Perry on the TV series Community, a hit comedy about life at community college for a group of unique outcasts.

Gillian herself was a self-described outcast, growing up as a theater nerd in Pittsburgh, Pennsylvania. She was raised by her mother Martina, and admits she was more comfortable around adults than children her own age. She began acting at the age of eight and attended Juilliard, graduating with a Bachelor of Fine Arts in 2004.

Her first role was as Adele Congreve on the television series The Book of Daniel in 2006. Following this, she made guest appearances on Fringe and Law & Order: Criminal Intent and shot the pilot of the TV series Traveler as the lead Kimberly before her role was recast.

Gillian had roles in several stage productions as well, including The Fabulous Life of a Size Zero and A Feminine Ending, both in 2007.

In 2008, the same year as her breakout role on Community, Gillian appeared on stage again at the Public Theater in The Little Flower of East Orange, a play written by Stephen Adly Guirgis and directed by Philip Seymour Hoffman.

For her role on Community, Gillian had to move from New York to Los Angeles, leaving behind her theater roots to pursue a career in television. The series ran from 2008 until 2015 and received several award nods. It was her role on the show that landed Gillian the part of Mickey on the Netflix series, Love. Her co-star and one of the show’s creators, Paul Rust, wrote the character of Mickey with Gillian in mind.

Apart from television, Gillian has appeared in several films, including small roles in Seeking a Friend for the End of the World (2012), The Incredible Burt Wonderstone (2013) and Hot Tub Time Machine 2 (2015).

Gillian returned to the silver screen as sorority sister Helen alongside Melissa McCarthy in the comedy Life of the Party (2018). She has also completed a role in the Disney big screen flick Magic Camp(2020), playing Christina Darkwood. She was also seen in the comedy I Used to Go Here (2020) and in the horror Come Play (2020).