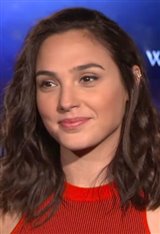 Gal Gadot was born in Rosh Ha’Ayin, Israel and brought up in a Jewish family.

At the age of 19, Gal won the 2004 Miss Israel competition, which lead her to travel to Ecuador for the Miss Universe competition, representing Israel. Unfortunately, Gal did not place and returned to Israel to continue modeling. A year later she joined the Israeli army as a sports trainer for the Israel Defense Forces. While in the army, Gal continued to model and in 2007 she took part in Maxim's “Women of the Israeli Army” shoot. Since 2008 Gal has been the lead model representing the Israeli clothing brand Castro.

Gal made her acting debut in 2007 as a lead in the Israeli drama series Bubot. Two years later, she beat out six other actresses for the part of Gisele in Fast & Furious. In 2010 Gal landed a small role in Knight and Day alongside A-list actors Tom Cruise and Cameron Diaz. That same year she starred as Mark Wahlberg’s Israeli girlfriend in Date Night.

Gal reprised her role as Gisele in the 2011 film Fast Five and again in the 2013 film Fast & Furious 6, which was her final appearance in the franchise, as her character was killed off.

On December 4, 2013, it was announced that Gal would star as Wonder Woman in the Man of Steel sequel, Batman v Superman: Dawn of Justice(2016), alongside Henry Cavill and Ben Affleck.

Despite her busy schedule as a superhero, Gal has had the opportunity to appear in various other films, including the crime thriller Criminal (2016) starring Kevin Costner, and the comedy Keeping Up with the Joneses (2016) alongside Jon Hamm, Zach Galifianakis, and Isla Fisher.

She reprised her superhero role in the standalone film Wonder Woman in 2017 and was back as the heroine in Justice League (2017). For the Wreck-It-Ralph sequel, Ralph Breaks the Internet(2018), she provided the voice of Shank. Gal will next be seen in Wonder Woman 1984 (2019).

Gal and her husband, Israeli businessman Yaron Versano, have a daughter together.