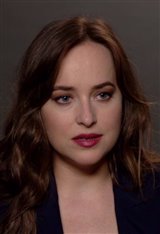 Dakota Johnson was born to be a star. She was born in Austin, Texas to actor parents Don Johnson and Melanie Griffith. In addition to having famous parents, her stepfather is a Hollywood icon: Spanish actor Antonio Banderas. Her grandmother is actress Tippi Hedren. Dakota attended school in Aspen, Colorado and took up dancing as a hobby. Her modeling career started at the age of 12, when she posed for a Teen Vogue photo shoot with other celebrity offspring.

Being born into a family of famous actors paid off for Dakota. In 1999, she made her film debut in Crazy in Alabama with younger half-sister Stella Banderas. The two girls acted alongside their real-life mother, Melanie Griffith. Directed by Antonio Banderas, the movie was a flop, but that didn’t deter Dakota, who wanted to become a professional actor and model.

In 2006 the actress had a busy year: she performed duties as Miss Golden Globe at the awards ceremony, becoming the first second-generation Miss Golden Globe. She also signed with IMG Models. Dakota continued to model over the years and in 2009 she modeled for Mango’s jeans line. After graduating from high school, Dakota decided to focus on her acting career and signed with the prestigious William Morris agency.

Her first role in years was a brief appearance in the 2010 box office hit The Social Network, which went on to earn eight Academy Award nominations. The awards buzz surrounding the film earned her several additional roles after that, in movies such as Beastly (2011), 21 Jump Street (2012) and The Five-Year Engagement (2012).

The actress has also shown her comedic chops in How to be Single (2016) alongside Leslie Mann and Rebel Wilson, worked with Tilda Swinton and Ralph Fiennes in the critically acclaimed A Bigger Splash (2016), and reprised her role as Anastasia Steele in Fifty Shades Darker (2017) and Fifty Shades Freed (2018).

Most recently, Dakota appeared in the thriller Bad Times at the El Royale(2018) where she played alongside Jeff Bridges and Chris Hemsworth, and in the horror film Suspiria (2018), playing an aspiring ballerina.

Dakota has previously been romantically linked to several musicians, and in September 2018 she confirmed that she is in a relationship with Coldplay frontman Chris Martin.