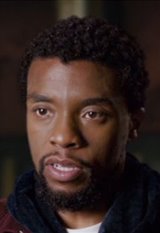 Chadwick Boseman studied theater as a young adult, graduating with a Bachelor of Fine Arts degree in directing from Howard University in Washington, D.C. He continued his studies at the British American Drama Academy in London, England.

His studies paved the way for his theatrical debut—he went on to appear in stage productions of Breathe, Romeo and Juliet, Bootleg Blues, Zooman and Willie’s Cut and Shine. During Chadwick’s time on the stage, he also collaborated with the Hip-Hop Theater Festival and penned scripts for his own stage productions, including Hieroglyphic Graffiti, Deep Azure and Rhyme Deferred.

In 2002, he received the AUDELCO award (an award to honor excellence in Black theatre) for his outstanding performance as E.J. in in Ron Milner’s play Urban Transitions: Loose Blossoms.

Chadwick's breakout role on the small screen came in 2008, when he scored a regular role on the ABC Family drama Lincoln Heights. During this time, he also made guest appearances on ER, Lie to Me, The Glades and Cold Case.

Chadwick made his big screen debut as Floyd Little in the 2008 sports biopic The Express, about Ernie Davis, a renowned running back for Syracuse University during the civil rights movement. He then went on to land a prominent role in the 2010 television series Persons Unknown, playing Muslim sergeant Graham McNair.

Despite his limited motion picture experience, Chadwick landed the starring role as iconic baseball player Jackie Robinson in the Warner Bros. biopic 42, opposite Harrison Ford. He next played James Brown in the biopic Get on Up (2014), and also starred in Draft Day (2014). In 2014, he won the CinemaCon Award for Male Star of Tomorrow.

He was cast as T'Challa/Black Panther in Captain America: Civil War (2016), and reprised the role in the standalone Marvel film, Black Panther (2018) and the follow-up Avengers movies, Avengers: Infinity War (2018) and Avengers: Endgame (2019). His appearance in Black Panther won him a 2018 People's Choice Award for Favorite Male Movie Star, a 2019 Screen Actors Guild Award for Outstanding Ensemble Cast in a Motion Picture and two MTV Movie Awards for Best Performance in a Movie and Best Hero.

Chadwick went on to not only star in the crime thriller 21 Bridges (2019), but he was also one of the producers on the film.

In 2016, Chadwick was diagnosed with Stage III colon cancer, which progressed to Stage IV over the course of the next four years. Despite that, he continued to act in several more films and was in preproduction for another when he died at his home in Los Angeles with his family at his side.

Chadwick received his first Academy Award nomination posthumously, for his role in Ma Rainey's Black Bottom (2020). For the same role, he won a Golden Globe award, as well as many other awards and nominations from other organizations. He also received several awards for his work in Da 5 Bloods (2020), directed by Spike Lee.

He is survived by his wife, singer Taylor Simone Ledward; his parents, Carolyn and Leroy Boseman; and two older brothers: Derrick - a preacher, and Kevin - a singer/dancer.