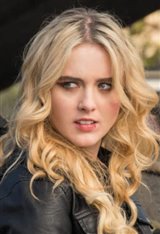 Born in Orlando, Florida, Kathryn Newton made her professional acting debut at the age of four when she was cast as Colby Marian Chandler on All My Children in 2002.

A few years passed before she would be cast as Louise Brooks on the CBS TV sitcom Gary Unmarried, playing Jay Mohr's daughter from 2008 to 2010. For her work on the show, she won a 2010 Young Artist Award for Best Supporting Young Actress in a TV Series (Comedy or Drama).

Following that, Kathryn made her motion picture debut as one of Cameron Diaz's students in the comedy film Bad Teacher (2011). She also appeared as Alex Nelson in Paranormal Activity (2012), which earned her the 2013 Young Artist Award for Best Leading Young Actress in a Feature Film.

On the popular Disney Channel series Dog with a Blog, she played the recurring role of Emily Adams from 2013 to 2014, then was cast as rebel monster-hunter Claire Novak on the hit series Supernatural from 2014 to 2018.

In 2016, Kathryn landed a regular role as Joanie Clark on AMC Studios' drama series Halt and Catch Fire from 2016 to 2017, then on the big screen, she played Darlene Bell in Greta Gerwig's Lady Bird (2017) and Angela in Three Billboards Outside Ebbing, Missouri (2017).

Just as she was considering attending college in 2017, Kathryn auditioned for and was cast in the role of Abigail Carlson on the HBO series Big Little Lies alongside Reese Witherspoon, Nicole Kidman and Shailene Woodley.

Roles in the raunchy comedy Blockers (2018) and the family film Pokémon Detective Pikachu (2019) followed, before she landed a starring role on the Netflix series The Society in 2019.

In 2020, Kathryn starred opposite Vince Vaughn as a teenager who switches bodies with a serial killer in the theatrical release Freaky (2020).

Kathryn, who grew up with a poodle, now has three poodles of her own. Her mother Robin is an airline pilot and her father is a businessman. Kathryn grew up on a golf course, which is how she learned to love the game, playing in her first golf tournament at the age of eight.

She attended Notre Dame High School in Sherman Oaks, California, where she ran for school president as a freshman and was a member of the golf team.

Besides playing golf, Kathryn also enjoys attending fashion shows. Her goal is to combine the two by creating a golf line of clothing for women.