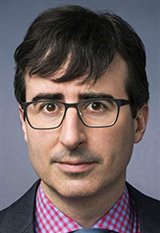 John’s father Jim worked as both a school headmaster and social worker, while his mother was a music teacher. As a child John attended the Mark Rutherford School in Bedford. Following his secondary school education, John studied at Christ’s College in Cambridge, graduating with a degree in English. During his time at Christ’s College he was a member of the Cambridge Footlights alongside actors/comedians David Mitchell and Richard Ayoade. John would later become the club’s vice president prior to his graduation.

Oliver began his career in stand-up comedy, first appearing at the Edinburgh Festival Fringe in 2001 as part of The Comedy Zone, which featured new acts. The following year he would perform his solo debut show, with a follow-up show in 2003. His first taste of political comedy came in 2004 and 2005 when he and Andy Zaltzman created the radio show Political Animal.

This would lead Oliver to joining The Daily Show with John Stewart as its Senior British Correspondent in 2006 on the recommendation of fellow comedian Ricky Gervais, whom he hadn’t met at the time but who was familiar with his work.

Eventually Oliver would move to New York City to join The Daily Show. During this time, he would perform stand-up comedy at small clubs around the city before becoming a headline act himself in larger venues. His first stand-up special, titled John Oliver: Terrifying Times, debuted on Comedy Central in 2008 with a DVD release coming soon after.

He would also make his feature film debut in a small role in the Mike Myers comedy The Love Guru (2008). During his years on The Daily Show he would win Emmy Awards for writing in 2009, 2011, and 2012. In 2013 Oliver was bumped up from correspondent to guest host for eight weeks while John Stewart was off making his feature film Rosewater (2014).

During his time as a guest host, Oliver drew rave reviews for his performance, with many suggesting he should be the eventual successor to John Stewart, or at the very least be offered a chance to host his own show. One such opportunity could have been replacing Craig Ferguson on The Late Late Show; however, HBO saw fit to give Oliver his own outlet with Last Week Tonight with John Oliver beginning in April of 2014, with Oliver initially contracted to host the show for two years, which would eventually be extended.

His next major TV acting gig was the recurring character of Professor Ian Duncan on the hit comedy series Community, appearing on the show from 2009 to 2014. In 2017 he would also appear on the adventure comedy series The Detour.

Oliver was recently heard in Paramount Animation’s Wonder Park (2019) as Steve the porcupine, which he followed up by voicing the live-action version of Zazu in Disney’s highly anticipated The Lion King remake.

John Oliver is married to Kate Norley, whom he met while covering the 2008 Republican Convention for The Daily Show. Kate is a U.S. Army veteran who served as a medic in the Iraq War. She'd been attending the event with a group called Vets for Freedom. Together they have two sons.