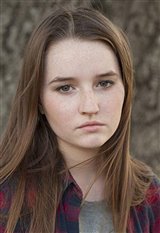 Kaitlyn Dever showed a flair for the arts at an early age. Born in Phoenix, Arizona to skating instructors Kathy and Tim Devers, she was enrolled at a young age in gymnastics, ballet and skating. When her father won a nationwide call to become the voice of Barney, the beloved purple dinosaur, Kaitlyn, her parents and her younger sister Mady moved to Dallas, Texas. Kaitlyn was enrolled in acting classes at the Dallas Young Actors Studio, where she was spotted by a talent agent.

Kathy took Kaitlyn to try her luck in Los Angeles. The nine-year-old immediately booked a Barbie commercial. For the next few years, Kaitlyn performed in TV commercials, returning to Dallas each summer, but by the time she was 13, after being cast in a supporting role in the TV movie An American Girl: Chrissa Stands Strong (2009), the entire family moved to Los Angeles.

By 2011, she was cast in regular roles on not one, but two TV series. She joined the cast of the FX series Justified in the second season as Loretta McCready, and was cast as Eve Baxter, the daughter of Tim Allen's character Mike Baxter, on the ABC sitcom Last Man Standing. For her role as Sasha Abernathy in the motion picture Bad Teacher (2011) starring Cameron Diaz, Kaitlyn was nominated a Young Artist Award. She was nominated the same year for both of her roles in her TV series. She stayed with Justified until 2015, during which time she also appeared in films such as J. Edgar (2011) directed by Clint Eastwood, Laggies (2014) starring Keira Knightley, and Men, Women & Children (2014) with Ansel Elgort and Jennifer Garner.

Last Man Standing was cancelled by ABC in May of 2017, which gave Kaitlyn the opportunity break to do films such as Beautiful Boy (2018) with Steve Carrell and Timothée Chalamet, and The Front Runner (2018), playing the daughter of Hugh Jackman's character. Last Man Standing was picked up in 2018 by Fox, with Kaitlyn making recurring rather than regular appearances. She also plays the lead role in the feature film Booksmart (2019), which is Olivia Wilde’s directorial debut.

When she's not acting, Kaitlyn plays guitar and sings in a band called Beulahbelle, with Mady, who plays piano and sings. They also have a younger sister, Jane.