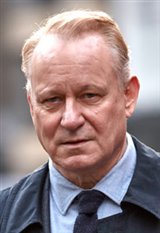 A native of Sweden, Stellan Skarsgård became a teen star in 1968 after playing the title role in the TV miniseries Bombi Bitt och jag.

Skarsgård also appeared in films during this time, most notably in The Simple-Minded Murder (1982) by Hans Alfredson. The performance garnered the actor both a Guldbagge (Sweden’s Oscar) and a Silver Berlin Bear. He portrayed the Skagen-painter Sören Kröyer in Hip hip hurrah! (1987) and the Swedish ambassador Raoul Wallenberg in Good Evening Mr. Wallenberg (1990), both directed by Kjell Grede. In Code Name Coq Rouge (1989) and The Democratic Terrorist (1992), Skarsgård played Jan Guillou's Swedish superagent Carl Hamilton. He also played the lead in the Oscar nominated Oxen (1991) directed by the world-famous cinematographer Sven Nykvist.

Skarsgård made his foray into American film with The Unbearable Lightness of Being (1988). His role as Captain Tupolev in The Hunt for Red October (1990) was supposed to be his biggest part in a Hollywood film, but unfortunately it was edited down. Instead, his breakthrough came with Lars von Trier's Breaking the Waves (1996) opposite newcomer Emily Watson. Skarsgård played Jan, a man disabled by an accident, who can no longer be intimate with his wife. He urges her to seek out other partners and to tell him the details.

The legendary actor can now be seen in the crime thriller Our Kind of Traitor (2016), the German drama Return to Montauk (2016), and the drama Music, War and Love (2016). He reprised his role in the sequel, Mamma Mia! Here We Go Again (2018) and starred in the 2018 drama Borg vs. McEnroe. In 2019, he starred in the HBO mini TV series Chernobyl, which earned him a Golden Globe award.

Skarsgård, who claims to be frequently mistaken for Liam Neeson, has six children with his first wife, My, a doctor, whom he divorced in 2007 after 32 years of marriage. He married again in January 2009 and his second wife, Megan, gave birth to his seventh child, a baby boy named Ossian, on April 26, 2009.