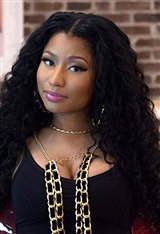 Nicki Minaj is most recognized as the outspoken rapper and popstar with a flair for fashion who brought music lovers hits like "Super Bass" and "Anaconda."

Born Onika Tanya Maraj in Saint James, Trinidad and Tobego, Nicki was raised in Queens, New York after moving there with her family at age five. The daughter of a drug-addicted father with a history of violence, Nicki endured a troubled home life and found taking on personas aided in her drive to become a new person and escape the reality she was living, and settled on the name Nicki Minaj, stating: "Fantasy was my reality."

Nicki attended La Guardia High School for the Arts where she studied acting and singing. Convinced she had to make it in the music business, Nicki signed on to do back-up vocals for local New York City rappers and later began writing her own material. She caught the attention of Dirty Money CEO Fendi, who signed her to his label. It was at that point she was introduced to rapper Lil Wayne, who recognized her talent and helped to launch her career, inviting her to collaborate on a series of mix tapes that garnered industry attention and displayed Nicki's talent for rapping.

By 2010, there was much anticipation for Nicki's debut album. She released her single "Massive Attack" and later won Best Hip-Hop Female at the annual BET Awards, which she dedicated to Lil Wayne. The singer has since released three platinum-selling studio albums: Pink Friday, Pink Friday: Roman Reloaded and The Pinkprint.

As a recognized leader in the industry, Nicki was asked in March 2012 to make an appearance as a guest judge on the then hit show American Idol. She later signed on to be a full-time judge with her season airing in 2013. It was at that time that it was speculated Nicki had a feud with fellow songstress Mariah Carey, which caused heated arguments between the two and at one point erupted with Nicki walking off the set. Nicki has since been critical of the show, tweeting, "'American Idol' is NOT a singing competition."

Nicki has proven herself as a multi-talented artist by lending her voice to various TV shows and films such as Ice Age: Continental Drift and The Cleveland Show, as well as appearing in the film Barbershop: The Next Cut in 2016. She has also used her fashion icon status for greater causes — in 2013, Nicki successfully partnered with mega make-up brand MAC to create her own Viva Glam lip gloss and lipstick collection whose proceeds benefit HIV and AIDS sufferers.

For Nicki, being an artist stems from her desire to be a influential female who empowers others. In an interview with Details magazine, Nicki explained, "I've always had this female-empowerment thing in the back of my mind...because I wanted my mother to be stronger, and she couldn't be. I thought, 'If I'm successful, I can change her life.'"

Indeed, she continues to thrive as an artist, releasing her own self-titled television show Nicki in 2016 and performing on the soundtrack for the 2017 installment of the popular Fifty Shades of Grey films: Fifty Shades Darker.

In 2018, her fans were able to enjoy her new songs when she launched "Queen," her fourth studio effort.

Nicki has been engaged to rapper Meek Mill since 2015.