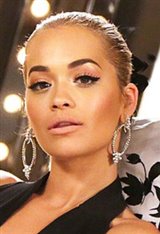 Known initially as a pop star, Rita Ora's on-screen presence has been steadily building thanks to her much-talked about role in the provocative film Fifty Shades of Grey. Having tackled different projects with skill and precision since then, she's been dubbed one to watch.

Rita, who was originally born in Kosovo but moved to the U.K. with her family when she was a baby, is the granddaughter of director Besim Sahatçiu. Her full name is Rita Sahatçiu Ora.

At a young age, Rita took a liking to singing. She grew up in West London and eventually graduated from Sylvia Young Theatre School and then St. Charles Catholic Sixth Form College.

She landed her first feature film role as Rosanna in the British picture Spivs (2004) before choosing to focus on her singing career. She lent her vocal talents to the 2007 track "Awkward" by Craig David and teamed up with him again in 2008 for "Where's Your Love." For the latter track, Rita also appeared in the music video.

Rita then auditioned for the 2009 televised Eurovision Song Contest as an 18-year-old. However, after a few episodes, she opted to withdraw from the contest. She has since attributed her withdrawal to not feeling ready enough for the competition's demands. Instead of vying for the win on the show, she turned her attention to singing in London bars.

Later in 2009, an A&R rep recommended Rita to Jay Z. She flew to New York to meet the "Empire State of Mind" rapper and he quickly signed her to his record label Roc Nation. She made a cameo in the video for his song "Young Forever" in 2010 and also appeared in the video for Drake's "Over."

Rita released her debut track "Hot Right Now" with DJ Fresh in 2012. It topped the charts in the U.K. Her album Ora, which was released in the same year, generated nearly 100 million views on YouTube.

The following year, she returned to film with an uncredited role in Fast & Furious 6, which starred Vin Diesel, Paul Walker and Dwayne Johnson. She also appeared in an episode of the series 90210.

In 2015, Rita became a judge on the fourth season of The Voice UK. She replaced Kylie Minogue and joined Ricky Wilson, Sir Tom Jones and will.i.am. on the panel. She was also a coach on X Factor (U.K.) with Nick Grimshaw, Cheryl Fernandez-Versini and Simon Cowell later that year.

The year 2015 was when Rita established herself on the big screen. She played a drug addict who attempts to seduce a boxer portrayed by Jake Gyllenhaal in the drama Southpaw, and also appeared in the Jamie Dornan and Dakota Johnson romance film Fifty Shades of Grey, which is based on E.L. James' novel.

In Fifty Shades, Rita plays Mia Grey, Christian's sister. Although she only had four lines in the film, she made an impact on viewers. Her fans (known as "Ritabots") longed to see more of her, and got that chance with her role in the sequels — Fifty Shades Darker (2017) and Fifty Shades Freed (2018).

Rita, who won Musician of the Year at Harper's Bazaar Women of the Year Awards in 2013 and has been nominated at the MTV Europe Music Awards, Brit Awards, Teen Choice Awards and Billboard Music Awards, cites Gwen Stefani as one of her biggest influences. No Doubt's track "Don't Speak" is one of her favorites.

In addition to her singing and film endeavors, she was the face of the Italian shoe brand Superga during their Spring/Summer 2013 campaign, modeled for DKNY's 2014 collections, and collaborated with Adidas.

In an October 2016 interview with Vanity Fair, she touched on her journey from Kosovo as a young girl to being one of Britain's brightest stars and the pleasure she takes in being an honorary ambassador for her country of birth. She said, "I'm probably one of the few [musicians] to be successful from my country. Women [there] don't have the creative freedom to express themselves and be heard. I meet girls from ages 10 to 30, and I'm working with UNICEF to create a platform where these women can express themselves."