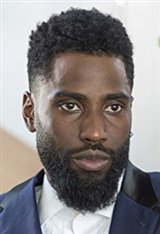 Born in the exclusive neighborhood of Toluca Lake in Los Angeles, John David Washington is the eldest son of actor Denzel Washington and singer/actress Pauletta Washington.

At the age of eight, John played a small role in Spike Lee's Malcolm X (1992), starring his father, Denzel Washington. However, following that experience he showed no further interest in acting for many years, devoting his time to sports instead.

After graduating from Campbell Hall School, an independent private school, John won a football scholarship to the private, male, historically Black Georgia Morehouse College in Atlanta. Upon graduation in May 2006, he signed as a running back with the St. Louis Rams. Released three months later, he was signed to their practice squad. He also played in Europe and later in the United Football League.

John returned to acting when he was 31, taking on the role of sports superstar Ricky Jerret in the HBO series Ballers, starring Dwayne Johnson as a former football star who organizes the finances of current football players.

On the big screen, he played small roles in RZA's Love Beats Rhymes (2017) and the small budget Monsters and Men (2018).

He earned a larger role in Monster (2018), which premiered at the Sundance Film Festival, before getting the biggest role of his career to date when he was cast in Spike Lee's comedy, BlacKkKlansman (2018). In it, he plays Colorado Springs' first black policeman in the 1970s, who infiltrates the Ku Klux Klan. The dark comedy earned positive reviews from critics and the Grand Prize of the Jury at the 2018 Cannes Film Festival.

His most recent film is Christopher Nolan's highly anticipated Tenet (2020), an espionage thriller based on the concept of time inversion. He stars alongside Robert Pattinson, Elizabeth Debicki and Kenneth Branagh.