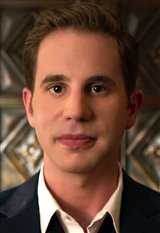 While attending an art school in the tony California neighborhood of Pacific Palisades, Ben began performing at a very young age.

At age nine, he made his professional debut as Winthrop in a production of The Music Man at the Hollywood Bowl, starring Kristin Chenoweth. By age 11, he was part of the cast of the national touring production of the musical Caroline, or Change.

Ben made his film debut with a small role as a Boy Scout in the musical movie adaptation Red Riding Hood (2006), which starred Henry Cavill as The Hunter.

It was not until 2012 that Ben's career really took off. He played the supporting role of Benji in the hit movie Pitch Perfect (2012), and later that year, he was cast as Elder Arnold Cunningham in the Chicago production of the hit musical, The Book of Mormon. The show ran for 10 months, then Ben reprised his role for a year on Broadway from January 7, 2014 to January 6, 2015.

He then reprised his role as Benji in the sequel Pitch Perfect 2 (2015) and the same year, played Daniel opposite Meryl Streep in Ricki and the Flash (2015).

Having participated in workshops for a musical that would become known as Dear Evan Hansen, Ben was cast in the title role of the musical, which debuted in Washington in 2015 and played several other cities before making its Broadway debut in December 2016.

Ben received much critical praise and went on to win several awards, including the Tony Award for Best Actor in a Musical. He stayed with the show until November 2017.

Following roles in a handful of indie films, Ben was cast in the lead role on the Netflix series The Politician, playing high school student Payton Hobart, who wants to become the President of the United States. Gwyneth Paltrow plays his mother on the series, which debuted in 2019 to high ratings.

Ben joined Mena Massoud and Nina Dobrev in the Toronto-filmed political drama, Run This Town (2020), about a scandal involving former Mayor Rob Ford. Ben played an aspiring journalist who longs to sink his teeth into a real story, when he catches wind of a scandal that may make his career.

He was scheduled to reprise his lead role as teenager Evan Hansen in a film verson of Dear Evan Hansen, after his father and Universal Pictures secured the film rights. However, Platt is now in his late 20s and the film, which is still in pre-production, does not have a release date, so the role may be recast.

On May 20, 2020, his Netflix special, Ben Platt Live From Radio City Music Hall, debuted on the streaming service.