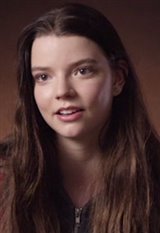 The youngest of six children, Anya Taylor-Joy was born to a Spanish-English mother and Scottish-Argentinian father in Miami, but shortly afterwards, her family moved to Argentina, where they lived until she was six years old.

Anya first stepped in front of the camera when she landed a modeling gig. However, she'd wanted to be an actress since the age of 16, and during a shoot she met the actors from Downton Abbey, who were also getting their pictures taken for a magazine. One of the actors, Allen Leech, who played Tom Branson on the historical drama, connected Anya with his agent, who got her an audition for the 2015 movie The Witch.

She also won a guest role on an episode of the crime drama series Endeavour., which aired before The Witch released to theaters.

However, it was The Witch that was Anya's breakout moment. In the chilling horror film, Anya played Thomasin, the eldest daughter in a Puritan family threatened by witchcraft. The movie was a favorite on the festival circuit and picked up an award at Sundance.

The same year, she also acted in the TV movie Viking Quest and played a supporting role in the series Atlantis as the character Cassandra, appearing in five episodes of the fantasy show.

Anya went on to star alongside Kate Mara and Jennifer Jason Leigh in the mystery movie Morgan and in the Barack Obama biopic Barry with Ashley Judd. Both films are 2016 releases.

In 2017, she played a kidnap victim in the box office hit, Split. She has also since reprised her role in the sequel, Glass (2019), as well as playing a role in the psychological thriller Marrowbone (2018) alongside Charlie Heaton. In Thoroughbreds (2018), she played a sociopathic teenager who wants to kill her stepfather.

In 2020, Anya took on the title role in Emma., based on Jane Austen's classic novel. She also played a mutant who discovers her powers in The New Mutants (2020), alongside Maisie Williams and Charlie Heaton.

Anya, who was unhappy about moving to England from Argentine, where much of her extended family lives, didn't learn English until the age of eight. She now divides her time between London and New York.