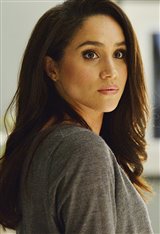 Meghan Markle was born in Los Angeles to Thomas W. Markle, a Director of Photography in Hollywood, and Doria Ragland. They divorced in 1988, when Meghan was seven. Meghan has a half-brother, Thomas Jr., and a half-sister, Samantha, from her father's previous marriage. For years, Meghan observed what it was like to be on a working set because after school each day, she would go spend time on the set of the sitcom Married With Children, where her father worked as the lighting director. Meghan attended private schools and went on to graduate from Northwestern University with a bachelor's degree in theater and international studies.

Her first onscreen role came in 2002, when she played Jill on an episode of General Hospital. Guest roles on series such as Century City and Cuts followed and in 2006, she landed a stint as a Briefcase Model on numerous episodes of the game show Deal or No Deal. It was steady money, but it steeled her will to find success as an actress. Many more guest appearances on hit shows such as 90210, Knight Rider, CSI: NY, CSI: Miami and Without a Trace followed before Meghan was cast as Rachel Zane on the Toronto-filmed series Suits in 2011. The show was a hit and made Meghan a name in Hollywood.

In 2014, Meghan founded a lifestyle site called The Tig, for which she wrote all of the content, about food, travel, fashion and beauty.

In June 2016, Meghan met England's Prince Harry through a mutual friend while the prince was visiting Toronto. They hit it off immediately and had been dating for six months before the press found out. On November 27, 2017, their engagement was announced. Since then, Meghan has resigned from Suits and has shut down her lifestyle website.

In January 2020, Meghan and Prince Harry announced their decision to step back from royal life and become "financially independent." On March 7, 2021, Prince Harry and Meghan sat down for an interview with Oprah Winfrey, revealing shocking details about the institution and the reason they left England.

Meghan said at one point she didn't want to be alive anymore because of everything she had to endure as a royal member, citing that the firm denied her permission to receive professional help.

After spending some time in Canada, the couple eventually bought a home in Montecito, California, where they currently reside.