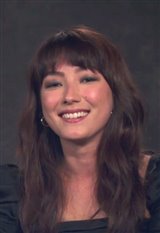 Natasha Liu Bordizzo was born in Sydney, Australia, to a Chinese mother and Italian father. She attended the University of Technology in Sydney where she studied law before deferring her degree to become an actress.

Natasha made her first film appearance in Netflix's Crouching Tiger, Hidden Dragon: Sword of Destiny (2016). To prepare for the role, which was physically demanding, Natasha underwent intensive training in sword fighting.

Following her film debut, Natasha appeared as Deng Yan in the American musical drama The Greatest Showman (2017). Less than a year later, she earned a role in Hotel Mumbai (2018) alongside Dev Patel and Armie Hammer. Natasha also made her first television appearance in 2019, starring on the new Netflix series The Society, which was cancelled after one season due to the pandemic.

Most recently, Natasha starred in the Amazon Prime Video original movie The Voyeurs (2021) alongside Ben Hardy and Sydney Sweeney.

Natasha has a black belt in taekwondo. She is also trained in other martial arts forms.