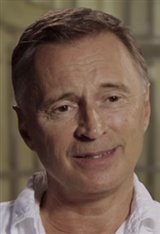 The son of a "bohemian" house painter, Carlyle got the acting bug at the age of 21 when he began hanging out at the Glasgow Arts Centre "on the promise of some attractive women." But picking up babes wasn't the only arena where he lucked out; his first gig as an actor was to play Orestes in the Centre's production of The Golden Mask of Agamemnon.

Carlyle then studied theater at the Royal Scottish Academy of Music and Drama and, after three years, took to the stage in a variety of repertory companies before becoming bored with performing "the same old Chekhov and Ibsen." In 1990 he met up with Ken Loach who gave Carlyle his big-screen break in Riff Raff.

Before he shot to fame with his portrayal of Begbie in Trainspotting, Robert was perhaps best known for the BBC series Hamish MacBeth, where he played a dope-smoking Highlands village police constable. With The Full Monty on his list of credits, Robert fast became one of Scotland's sexiest exports since Sean Connery. In 2013, Robert played a man fighting deportation in the drama California Solo. He also enjoys a recurring role as Rumplestiltskin on the hit ABC series Once Upon a Time.

In 2015, Robert made his directorial film debut with The Legend of Barney Thomson (2016), also starring in the title role of a Scottish barber who accidentally kills someone. Emma Thompson, despite being only two years older than Robert, played his mother in the comedy.