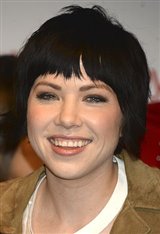 If you've heard of Carly Rae Jepsen, it's likely due to her multi-platinum-selling hit song, "Call Me Maybe," that took the airwaves and Internet by storm in 2012.

Since then, Carly has also been earning her stripes as a performer outside the recording studio.

Carly was born and raised in Mission, British Columbia, Canada. She attended Heritage Park Secondary School, and it was here where she would hone in on her passion for musical theater. Carly revealed in an interview with The Toronto Star that she received guidance from her high school drama teacher Beverly Holmes. Holmes produced many musicals at Heritage Park, which allowed Carly to showcase her theatrical talent. During her high school years, Carly would perform in musical productions such as The Wiz, Grease and Annie.

After high school, Carly faced the difficult choice between following her passion for performing or finding a more stable job. Realizing that settling for a comfortable career teaching music like her parents was a second choice for her, she pursued a stage career, and applied for and got into the Canadian College of Performing Arts in Victoria.

There, Carly worked to hone her skills in tap dancing, acting, and vocal lessons, while also attending Broadway shows in New York City to watch alumni of the college perform.

Upon graduation, Carly was unsure what to do, whether she wanted to pursue musical theater or a career as a pop singer. She would strum chords on the old guitar her parents had given her, and the more she sang and wrote songs, the more she felt that was her calling.

In the meantime, Carly worked many odd jobs — a party shop assistant, a barista, a bartender at a music club — any kind of employment she could find. "I'm grateful for those days now in hindsight," Carly said. "And I realize that those are struggles everybody goes through. The only difference is if you give up or not."

Luckily, her high school teacher came to her rescue again, letting her know about auditions for the televised singing competition Canadian Idol. Carly successfully auditioned, and would go on to place third in the show's fifth season in 2007. She also went on a national concert tour.

Confidence restored, Carly began to release her own music. In June 2008, she released her debut single and another single, a cover of John Denver's song "Sunshine on My Shoulders." Her debut album, Tug of War, was released in September 2008.

In September 2011, her infectiously catchy single "Call Me Maybe," which she co-wrote, was released in Canada. It caught the attention of famous pop stars such as Justin Bieber, Selena Gomez and Ashley Tisdale, who posted a video of themselves dancing and lip-syncing to the tune that instantly went viral in February 2012. Carly's dream of being a singer was realized. Soon after, she was approached by Bieber's manager Scooter Braun and signed to his label, Schoolboy Records.

She premiered her second album Kiss in February 2012, which quickly rose to the top of the charts. While she enjoyed her success as a pop star, Carly still hadn't completely abandoned her early theater aspirations. A little over a year after releasing Kiss, Carly was offered the lead role of Cinderella in Rodgers & Hammerstein's Broadway musical production of the same name — and of course, she did not hesitate.

Because her early musical theater experience wasn't well-known, her casting was initally met with skepticism. However, once she took to the stage, audiences were wowed by her impressive performance.

In June 2015 Carly followed up Kiss with her third studio album, EMOTION, in which she infused her love of '80s classic pop. It peaked at number eight in Canada and number 16 on the US Billboard 200, with hits like "I Really Like You" (Tom Hanks starred in her video for the song, which also featured an appearance by Justin Bieber) and "Run Away With Me." In January of the following year, Carly once again returned to her stage roots, taking on the role of Frenchy in Fox's live TV presentation of the hit musical Grease, in Grease Live!, which enjoyed high ratings.

Carly also recorded the theme song for the Netflix revival of Full House, called Fuller House, which premiered in February 2016.

The singer also brought her vocal talents to the character of Odette in the animated feature Ballerina (2017).