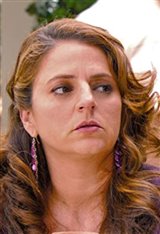 Annie Mumolo is an American actress, screenwriter, comedian, and producer, best known for her work in Bridesmaids (2011).

Annie was born in Irvine, California and is of Italian descent. In 1991, she graduated from Mater Dei High School, and later attended the University of California, Berkeley, where she was a member of Chi Omega, and graduated with a Bachelor of Arts in history in 1995.

Dreaming of a career in acting, Annie moved to Los Angeles after graduating college. In an interview with Vanity Fair, Annie said she took acting classes throughout her time in college, and continued to do so at the South Coast Repertory Theater after graduation.

Annie made her feature film debut in the movie Melvin Goes to Dinner (2003) as an extra. In 2005, she had a small role in the film Bewitched (2005), starring Will Ferrell and Nicole Kidman.

In 2006, Annie made her television debut on the series The Minor Accomplishments of Jackie Woodman (2006), playing a boutique clerk. She has also done voice acting for television series, on shows such as Father of Pride (2004), voicing Flamingo Girl, and Curious George (2006-2015), doing a number of voices, including the main role of Bill.

It wasn't until 2011 that Annie's career started to take off. She co-wrote, produced, and appeared in the award winning rom-com Bridesmaids, playing a nervous passenger on a plane. Her work in the film earned her multiple nominations, of which include both Academy Award and BAFTA nominations for Best Original Screenplay. She won the EDA Female Focus Award for Best Woman Screenwriter from the Alliance of Women Film Journalists and Best First Screenplay from the Online Film & Television Association. During filming, she was pregnant with her second child, Vincent.

In 2016, Annie starred alongside Mila Kunis, Kristen Bell, Kathryn Hahn, Jada Pinkett Smith and Christina Applegate in the film Bad Moms (2016), playing Vicky. The film earned the People's Choice Award for Favorite Comedy Movie in 2017, and also earned Annie and her co-stars the CinemaCon Award for Female Stars of the Year in 2016.

She most recently reunited with Bridesmaids co-writer Kristen Wiig to create Barb & Star Go to Vista Del Mar (2021), a comedy film they both starred in, as well as wrote and produced.

In 2005, Annie married fellow actor and writer Tim Lovestedt. The couple had their daughter Grace and their son Vincent while they were together. Annie and Tim were married for 11 years until their divorce in 2016.

Annie was a member of the improv group The Groundlings. There, she met Kristen Wiig, who was also part of the group. The two of them have had a solid friendship since, in addition to working together on multiple projects. ~Sean Olegario