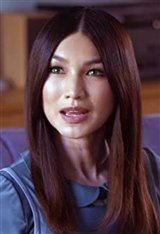 Gemma Chan is an English actress and model best known for her work on the TV show Humans and the films Crazy Rich Asians and Eternals.

Gemma was born in London, England. She was raised in Locksbottom, a suburb near Sevenoaks, Kent. She attended Newstead Wood School for Girls in Orpington, London. She then went on to study jurisprudence at Worcester College, Oxford. Following her graduation from Worcester College, Gemma was offered a training contract at the Slaughter and May law firm, but turned it down to pursue an acting career at the Drama Centre London.

Gemma made her acting debut in 2006, appearing on the Horror Channel miniseries When Evil Calls (2006).

In 2009 Gemma appeared on a special episode of Doctor Who (2009) titled "The Waters of Mars," playing geologist Mia Bennett. The episode won the 2010 Hugo Award for Best Dramatic Presentation, Short Form.

Gemma made her big screen debut in 2009 with a minor role in the film Exam (2009), which premiered at the Edinburgh International Film Festival.

In 2015, Gemma starred on the Channel 4 sci-fi series Humans (2015-2018), playing the role of Anita/Mia, an anthropomorphic robot. Her work on the show would earn her critical praise and recognition, as she was nominated for a Broadcasting Press Guild Best Actress award as well as a Breakthrough Award for her portrayal.

In 2018, Gemma co-starred as Astrid Leong-Teo in the critically acclaimed film Crazy Rich Asians (2018). Originally asked to portray the lead role of Rachel Chu, Gemma preferred the more intriguing role of Astrid. In an interview with Deadline, she said, "I don’t know exactly what they’re going to do in the sequels, but I think if they want to explore more of Astrid's back story, the history of her marriage and her relationships, and also what she's doing with her life, I think it's really exciting.

"You leave her at the end of the first film and you know, anything's possible. I've loved it. I love playing those kinds of parts. What you see with Astrid is not necessarily what you get. There are layers to her. She’s someone who seemingly has it all together, but yet there's a whole lot of stuff going on beneath the surface.”

Along with the film's large number of awards and nominations, Gemma also received her fair share of accolades, including a Music City Film Critics' Association award nomination for Best Supporting Actress and a National Board of Review Award for Best Ensemble shared with her co-stars.

In 2019, Gemma appeared in the Marvel film Captain Marvel (2019), playing Minn-Erva. Her work on the film earned her an MTV Movie Award for Best Fight as well as a National Film and Television Award nomination for Best Actress.

In 2021, Gemma voiced the warrior princess Namaari in the Disney animated film Raya and the Last Dragon (2021).

She most recently starred in Chloé Zhao’s MCU film Eternals (2021), playing the role of Sersei.

In 2011 on the set of the TV series Fresh Meat (2011), Gemma met actor/comedian Jack Whitehall, whom she dated until 2017 when they broke up due to conflicting schedules. She is currently in a relationship with English actor Dominic Cooper, whom she has been with since 2018. They currently live in Brooklyn, New York. ~Sean Olegario