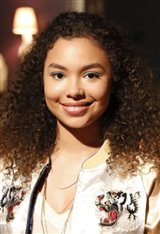 Jessica Sula was born in Swansea, Wales. She's best known for playing Grace Blood on the fifth and six seasons of the Channel 4 British TV series Skins, about a group of teens struggling to grow up, surrounded by parents and teachers who are questionable authority figures.

She was 16 at the time and had gone to an open call. After eight grueling auditions, she found out she'd been chosen over thousands of other actresses who'd tried out for the role.

It was also her first professional role, having only appeared in school plays and youth theater prior to landing the television show.

When her role on the series ended in 2012, Jessica quickly landed another recurring role on another British TV series, Love & Marriage (2013). The following year, she made her film debut in Honeytrap (2014), playing a teenage girl who is involved in a teenage boy's murder. The movie received a nomination for Outstanding Foreign Film at the 2016 Black Reel Awards.

She followed that up with a starring role in M. Night Shyamalan's 2017 movie Split, as one of three teenage girls who are kidnapped by a mentally ill man (played by James McAvoy) with multiple personalities.

Her latest credit is the romance drama The Lovers (2017) with Debra Winger and Tracy Letts.