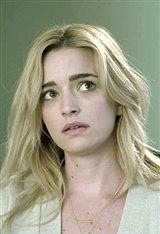 Brianne Howey is an American actress best known for her roles on television as Kat Rance on The Exorcist (2016-2017) and Shauna Babcock on The Passage (2019).

Brianne was born in La Cañada, California, just outside of Los Angeles. As a young girl, because her family often traveled to faraway places such as Australia on vacations, she grew up wanting a job that would take her around the world and decided on being a flight attendant. However, while in high school she joined the school's improv team, which sparked an interest in acting.

Following high school, she enrolled at the New York University Tisch School of the Arts to study theater.

While at university, Brianne worked at a hair salon, and also started acting in short films such as Suckerpunch (2008) and Appropriate Sex (2009).

After university, Brianne made her television debut, appearing on an episode of 90210 (2010). In 2011, she appeared on the show The Middle (2011), which became her first recurring role. She continued to work on a number of television shows in recurring roles on series such as Criminal Minds (2013) and Twisted (2014).

In 2016, she was cast as Kat Rance on the first season of the Fox horror series The Exorcist.

In 2014 she played Candy in Horrible Bosses 2 (2014), working alongside Jason Bateman, Jamie Foxx and Jennifer Aniston.

In 2019, she was cast to play Shauna Babcock on the Fox series The Passage, based on the best-selling novel trilogy by Justin Cronin about vampires.

Most recently, Brianne starred as Georgia Miller on the Netflix show Ginny & Georgia (2021).

In her spare time, Brianne enjoys spending time with her family, including her younger sister Cailan and three much younger half-siblings. She also enjoys watching movies with her boyfriend Matt Ziering and going to farmer's markets. ~Sean Olegario