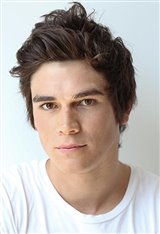 The youngest of three siblings born in Auckland, New Zealand to Kiwi mother Tessa and Samoan father, Keneti Apa, K.J. grew up an avid guitarist, playing at home and on street corners around Auckland. K.J. even brings a guitar with him on location and often joins street musicians while he’s shooting. The passionate musician also writes songs, recorded a solo guitar album at 14, and was in a band back in New Zealand. K.J. says his favorite band is Van Halen.

K.J. takes pride in his Samoan heritage and even has a traditional Samoan tattoo on his right shoulder, which was intended to be the start of an eventual full sleeve, which he’s put on hold so it doesn’t limit his options while he pursues acting.

K.J. got his start play Kane Jenkins on the New Zealand soap opera Shortland Street in 2013, and had a six episode arc on the first season of The Cul de Sac in 2016. K.J. is currently starring as Archie Andrews on the popular CW/Netflix original series Riverdale.

K.J. has naturally dark brown hair and had to spend hours in a salon to get Archie’s signature red hair before filming started. He now has to spend two and a half hours every two weeks getting the color touched up. While he finds that irritating, he said the thing he finds the most challenging about starring in Riverdale is being from New Zealand, while playing such an iconic American teenager. Archie plays guitar and sings on the show, and K.J. said that although he's been playing guitar for years, singing was a new and nervous experience for him.

In a Facebook Live Q&A KJ said he went to a private school that “was 100 per cent like Hogwarts, we had houses and everything.” KJ also said he’d be a Slytherin if he had actually gone to the wizarding school.

In September 2017 K.J. fell asleep at the wheel driving home from set after a 14-hour work day while filming season 2 of Riverdale. K.J. was checked at the scene by first responders and had only minor injuries, although his car was totalled. Luckily, his co-star Cole Sprouse, who was originally going to get a ride with K.J., bowed out at the last minute.

K.J. has recently broken into the movie business, first getting his start as Ethan Montgomery in the major motion picture A Dog’s Purpose (2017) which he then followed up with a role in the drama The Hate U Give(2018), where he played opposite Amandla Stenberg. Most recently, KJ returned to theaters in Altar Rock (2019), a film about the Boston marathon bombing.

He had the chance to put his musical talents to good use in the romantic drama I Still Believe (2020), in which he played a Christian music star opposite Britt Robertson.

K.J. says he and the cast of Riverdale have been really good friends, including Cole Sprouse, with whom he's gone on camping trips, especially while traveling from the Los Angeles area to Vancouver, where the show is filmed.

Since December 2019, he has been dating French model Clara Berry.