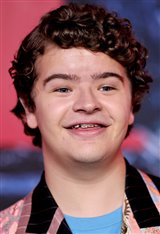 Although he was born in Connecticut, Gaten Matarazzo was raised in Little Egg Harbor Township, New Jersey. Early in his career, he obtained vocal training at Starlight Performing Arts Center in New Jersey. He placed third at the Starpower Talent Competition, singing "Ben."

Gaten began his career on the stage, portraying Benjamin in the Broadway musical Priscilla, Queen of the Desert at the Palace Theatre in 2011. He continued working on Broadway in 2014 when he appeared as Gavroche/Petit Gervais in Les Misérables. In 2019, he played Jack in the Hollywood Bowl rendition of Into the Woods. Gaten returned to Broadway in 2022 in the role of Jared Kleinman in Dear Evan Hansen.

In 2016 he appeared in his most iconic role, Dustin Henderson, on Netflix's hit original television series, Stranger Things. He has continued to play the role for the program's four seasons. Along with the rest of the main Stranger Things cast, he won a Screen Actors Guild Award for Outstanding Performance by an Ensemble in a Drama Series.

Gaten was born with cleidocranial dysplasia (CCD). He is an avid supporter of CCD Smiles, an organization that aids the lives of those with CCD.