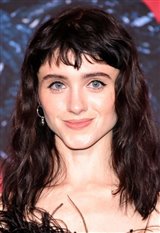 Natalia Dyer was born and raised in Nashville, Tennessee. She graduated from Nashville School of the Arts before enrolling in NYU, studying at the Gallatin School of Individualized Study.

Her star rose when she was cast as Nancy Wheeler in 2016 on the Netflix original series Stranger Things. Natalia, along with the rest of the cast of Stranger Things, won the Screen Actors Guild Awards for Outstanding Performance by an Ensemble in a Drama Series in 2018.

In 2020 she appeared as the title character in Jane Eyre, one of the episodes of the TV series Acting for a Cause, a charity organization that raises money through performing live readings with celebrity guests.

Natalia has been in a serious relationship with fellow Stranger Things star Charlie Heaton since 2016.