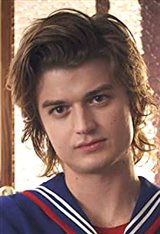 Joseph (Joe) Keery is an American actor and musician from Newburyport, Massachusetts. He attended The Theatre School at DePaul University where he graduated in 2014 with a Bachelor of Fine Arts in Acting.

In 2016, Joe got his big break with the release of the Netflix Original series Stranger Things (2016-present). On it, he played Steve Harrington, who went from a recurring character to a leading regular role after only one season. Joe is best known for this performance, and season four of the much-loved sci-fi series is slated for a 2022 release.

In between filming Stranger Things, Joe made brief appearances in the feature films Molly's Game (2017) and After Everything (2018). He also earned a starring role in the satire film Spree (2020), before landing the role of Keys in blockbuster film Free Guy (2021) alongside Ryan Reynolds.

Aside from acting, Joe is also a successful musician. He is a guitarist for the Chicago-based band Post Animal. Post Animal released their first full-length album in 2015 and their second in 2018. In 2019, Joe released his first solo album, titled Twenty Twenty.

Joe is currently dating actress Maika Monroe, whom he met while filming After Everything (2018).