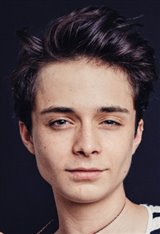 Born and raised in Chicago, Lucas Jade Zumann is the eldest of four siblings. His introduction to performing came when he was cast in a 2012 Light Opera Works production of the stage musical Oliver, playing one of Fagin's boys.

His television debut came just a few years later, when he played a "punk" in an episode of the Netflix series Sense8, created in part by the Wachowskis. The same year, Lucas made his motion picture debut in the horror movie sequel Sinister 2 (2015), playing the role of Milo. He followed that up with the role of Jamie in the motion picture 20th Century Women (2016), starring alongside Annette Bening, Elle Fanning and Billy Crudup.

In 2017, he landed the plum role of Gilbert Blythe in the TV series Anne, about the adventures of Canadian heroine Anne Shirley from the classic book Anne of Green Gables by L.M. Montgomery. The series is filmed in Toronto for the Canadian Broadcasting Corporation and Netflix.

In the 2018 romantic fantasy Every Day (2018), Lucas plays Nathan, alongside Angourie Rice.