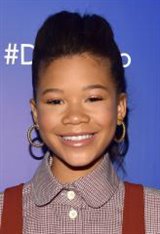 Born in Atlanta, Georgia, Storm Reid made her big screen debut in the role of Emily at age nine in the Oscar-winning drama 12 Years a Slave (2013). A number of guest appearances on popular TV series followed, including Nicky, Ricky, Dicky & Dawn and NCIS: Los Angeles in 2014 and Chicago P.D. in 2015.

Since then, she played Patricia in Judy Greer's directorial debut, A Happening of Monumental Proportions (2017), co-starring Allison Janney, Common and Bradley Whitford.

Storm has also been keeping busy on TV, with roles on the HBO teen drama Euphoria (2019) alongside Zendaya, and a voice role on Hulu's animated series The Bravest Knight (2019).