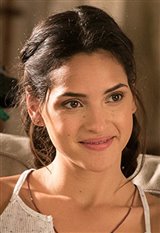 Adria Arjona is an actress of Puerto Rican and Guatemalan descent. Born in Puerto Rico, she grew up in Mexico City but often traveled with her parents. Her father, a musician, allowed Adria to experience the world of music and art and essentially live a bohemian lifestyle. At the age of 12, she and her family moved to Miami, where she would stay until she relocated to New York at 19 to study acting.

Adria lived in New York for four years and attended the Lee Strasberg Theatre & Film Institute. She credits her time in the city for having helped her grow up and make her a tougher person.

Her debut film was the horror-thriller The Belko Experiment (2016), in which she was cast as Leandra Florez, assistant to Tony Goldwyn’s Barry Norris.

Adria had a recurring role on the second season of the TV series True Detective and made guest appearances on the TV series Narcos and Person of Interest. In 2017 she was cast as Dorothy Gale in the short-lived Emerald City series, which took the original Wizard of Oz books and gave them a fantastical spin. In this version, Dorothy appears as a bilingual nurse from Kansas who ends up in Land of Oz and unknowingly fulfills a lifechanging prophecy.

In Pacific Rim Uprising (2018), Adria played Julie Reyes, a PPDC officer, in the Melissa McCarthy comedy Life of the Party (2018) she played Amanda, a sorority sister.