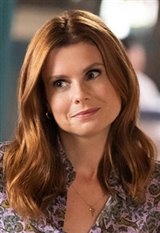 JoAnna Garcia Swisher is best known for her television roles as Cheyenne Hart-Montgomery on Reba (2001-2007) and Maddie Townsend on Sweet Magnolias (2020).

Born in Tampa, Florida, JoAnna began her acting career early, with guest roles on series such as Superboy and Clarissa Explains It All in 1992. Just two years later, she was cast as Sam on the show Are You Afraid of the Dark? which was filmed in Montreal. She stayed with the series for three seasons.

After high school, she went on to study at Florida State University, but dropped out to pursue a full time career in acting when she kept getting roles, including a recurring role as Hallie on the popular series Party of Five in 1998.

After playing guest roles on a number of hit series, such as Dawson's Creek, Providence and Family Law, in 1999, she landed a recurring role as Vicki Appleby on the series Freaks and Geeks.

From 2001 to 2007, JoAnna went to work on the sitcom Reba, playing Cheyenne Hart-Montgomery, Reba's oldest daughter on the show. Her portrayal earned her a Teen Choice Award nomination for Choice TV Actress-Comedy in 2005.

In 2008, she landed a starring role on the show Privileged (2008-2009) as Megan Smith. Her work on the show earned her an ALMA award nomination for Actress in Television-Comedy in 2009.

Although she has spent most of her career on television, JoAnna is not a stranger to the big screen, having appeared in movies such as American Pie 2 (2001), Not Another Teen Movie (2001) alongside Chris Evans, and The Internship (2013), starring Vince Vaughn and Owen Wilson.

Her most recent work was playing the lead role of Maddie Townsend on the hit Netflix series Sweet Magnolias (2020).

In 2010, she married MLB player Nick Swisher. Her co-stars from Reba, Reba McEntire and Melissa Peterman attended the wedding as bridesmaids. JoAnna and Nick have two children. ~Sean Olegario