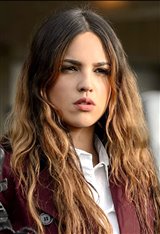 Eiza was born in Mexico City, Mexico. She grew up with one older brother, her mother and her father. When she was 12, her father tragically died in a motorcycle accident.

After completing acting school at the age of 16, Eiza was cast to play the main role of Dolores "Lola" Valente in Lola, érase una vez. The show was so popular that it aired not only across Latin America, but also in the United States. With such a strong debut, this became her breakout role, and also boosted her popularity as an actress.

After completing the show, both Eiza and her mother would head to New York City, where she would study acting at Lee Strasberg Theatre and Film Institute. They returned to Mexico City when she completed her course.

In 2010, Eiza was cast by Nickelodeon Latin America to star on the telenovela Sueña conmigo (2010). Her portrayal as an aspiring singer named Clara Molina was another hit for the young actress. The show’s success led to her performing concerts throughout Argentina from March to July 2011. Her work on the show earned her three Favorite Actress nominations in 2011, and she won Newcomer on TV in the same year.

In 2013, Eiza wanted to take on more English speaking roles, so she moved to Los Angeles to further her acting career. She was cast as Santanico Pandemonium on From Dusk till Dawn: The Series (2014-2016). This would be her first English-speaking role.

As soon as the series ended, she made her Hollywood film debut in Baby Driver (2017), playing Monica "Darling" Castello, followed by a role in Welcome to Marwen (2018) starring Steve Carell. She also did the Spanish dub for the character Eep Crood in The Croods (2013).

Eiza has also worked as a singer, and has two albums that both charted in Mexico, as well as one in the United States. She has also released three singles.

Her most recent Hollywood projects are Godzilla vs. Kong (2021) and Spirit Untamed(2021). ~Sean Olegario