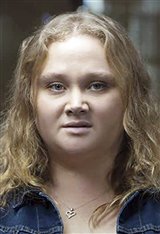 Danielle Macdonald is an Australian actress best known for her work in the films Patti Cake$ and Dumplin'.

Danielle Macdonald was born in Sydney, Australia. She attended the Australian Institute for Performing Arts in Naremburn, New South Wales, where she took performing arts classes in grade eight and then improv and screen classes in grade ten. When she was 17, Danielle took more acting classes in Los Angeles, later making the move from Australia to Hollywood when she was just 18.

In 2010, Danielle was cast as Becca Huffstatter on the ABC drama series Huge, but since her visa did not come in time, she had to give up the role.

Danielle made her acting debut in the short film The Thief (2010), playing the minor role of a cashier. She also appeared in the 18th episode of the second season of Glee in 2011.

In 2013, Danielle made her first feature film appearance in the film The East (2013), playing the role of Tess.

The following year, she starred alongside Dakota Fanning, Diane Lane, and Elizabeth Banks in the film Every Secret Thing (2014), where she played Alice Manning.

In 2016, Danielle starred in the film Patti Cake$ (2016), playing Patti, an aspiring rapper from New Jersey. In 2017, she was nominated for a Golden Space Needle Award for Best Actress for her performance in the film. The film also received a nomination for the Grand Jury Prize at the Sundance Film Festival in 2017, with critics and audiences giving high praise for Danielle’s performance.

The following year was a successful one for Danielle, as she appeared in two Netflix films, Dumplin’ (2018) and Bird Box (2018). For the film Dumplin’, Danielle played the title character, Willowdean "Dumplin'" Dickson opposite  Jennifer Aniston as her mother, Rosie Dickson. In Bird Box, Danielle played Olympia, a pregnant woman who was a part of the survivor group that included Sandra Bullock’s character.

The following year, she appeared in the Helen Reddy biopic, I am Woman (2019), playing Lillian Roxon, an Australian journalist and author. Her performance in the film earned her a 2020 nomination from the Women's Image Network Award for Actress in Feature Film.

Her most recent project, Falling for Figaro (2020), has her flexing her singing skills, as she plays an aspiring opera singer, Millie.

Although born in Australia, Danielle’s parents are of Italian and Scottish descent. She has one older sister.

Other awards she has received include a Screen Australia Breakthrough Award in 2017, and a spot on Variety’s 10 Actors to Watch that same year. ~Sean Olegario