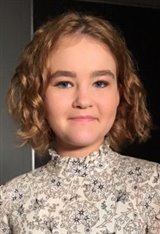 Millicent Simmonds was born in Bountiful, Utah. Just before she was 12 months old, she received an overdose of medication that left her deaf. Her parents and siblings learned American Sign Language (ASL) so they would be able to communicate with her.

At a school for deaf children, Millicent participated in their drama club, then made her stage debut at the Utah Shakespeare Festival. She also appeared in a Salt Lake Community College student short film titled Color the World in 2015, playing opposite her mother, Emily Simmonds. The film was about a mother with a deaf daughter, and the two switch bodies in "Freaky Friday" style.

Having enrolled in public school by the sixth grade, Millicent learned from a teacher that there was an open call for a young deaf actress to play a starring role in a movie called Wonderstruck (2017). She was cast, and wound up playing opposite Oakes Fegley.

Next, John Krasinski cast her in the role of his daughter, Regan Abbott, in A Quiet Place(2018), which went on to be a huge success. While on the set, she wound up teaching ASL to her fellow co-stars — including Emily Blunt, who played her mother, and Noah Jupe, who played her brother.

After making guest appearances on the Disney Channel series Andi Mack (2018 to 2019) and the Sundance series This Close (2019), she reprised her role as Regan Abbott in the sequel, A Quiet Place Part II (2021).

Millicent, who has some access to sound thanks to a cochlear implant, rarely speaks and usually communicates through ASL.