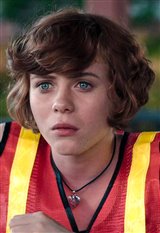 Born in Brooklyn to parents Juliana Melleveold and David Lillis, Sophia Lillis is best known for portraying the young Beverly Marsh in the film adaptations of Stephen King’s IT (2017) and IT: Chapter Two (2019).

Her acting career began at the young age of seven, when her stepfather encouraged her to take acting classes at the Lee Strasberg Theatre and Film Institute in Manhattan. While studying there, one of her teachers recommended Sophia for a NYU student film. From that point she signed with an agent and began auditioning for roles.

It wasn’t until a year later when Sophia would break out in a big way, playing a substantial role in the first part of director Andy Muschietti’s adaptation of the Stephen King novel It, playing the young Beverly Marsh.

Sophia’s next big break would be in 2018 when she was cast on the HBO mini-series Sharp Objects as the younger version of Camille Preaker, played by Amy Adams. The following year she starred as Nancy Drew in Warner Bros.’ film adaptation Nancy Drew and the Hidden Staircase (2019), receiving praise for her performance. Later in 2019 she reprised her role of young Beverly Marsh in IT: Chapter Two (2019).

Sophia has two films set for release in 2020, with the first being a new adaptation of the classic Brothers Grimm folklore tale in Gretel & Hansel (2020), as the titular Gretel. She also stars as Beth Bledsoe in the drama Uncle Frank (2020), in which she plays Paul Bettany's niece. She also stars as Sydney on the Netflix coming-of-age series I Am Not Okay with This, which debuted in February 2020.

As a young child, when her parents divorced, Sophia decided to retain her father’s last name. She has a twin brother named Jake, and a stepbrother from her mother’s second marriage, named Phillip.