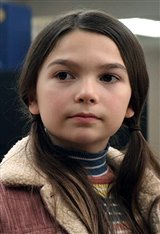 Brooklynn Prince was born in Florida to a mother who is an acting coach. She got her start at the age of two in print and screen advertisements for a variety of well-known companies.

In 2017, Brooklynn booked her first movie roles in Robo-Dog: Airborne as Mira and in The Florida Project as Moonee. For her performance in the latter, she received critical praise and won several awards at film festivals.

In 2019, Brooklynn took voice roles in The Lego Movie 2: The Second Part and The Angry Birds Movie 2, and the following year she played Flora Fairchild in the horror film The Turning (2020). She also provided the voice of Ruby in the Disney+ movie The One and Only Ivan (2020).

That same year, Brooklynn earned the leading role of Hilde Lasko in the Apple TV+ series Home Before Dark (2020), which is based on the true story of Hilde Lysiak, a nine-year-old journalist who uncovers clues to an unsolved case.

While shooting the second season of the series in Vancouver, the Coronavirus pandemic hit, and she stayed in Canada with her parents and nanny, celebrating her 10th birthday there. When restrictions lifted, the second season was finished and was scheduled to release on Apple TV+ on June 11, 2021.

In her spare time, Brooklynn enjoys playing with Barbies inside and playing soccer and gardening outside.