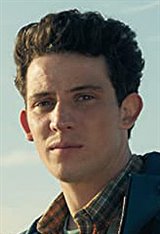 Born in Southampton, Hampshire, England, Josh O'Connor comes from a very creative family. His grandfather was a sculptor, his grandmother was a ceramicist and his aunt is a writer. Although Josh shows off his own art on his Instagram page, he has been interested in acting since he was a child.

Josh grew up in Newbury until he was five, when his family moved to Cheltenham. He played his first role at the age of seven in a school production of The Wizard of Oz.

Josh graduated from the Bristol Old Vic Theatre School in 2011, where he trained as an actor. During his third year of school, he signed with an agent. His first television role was two lines on the ITV series Lewis, followed by a few more lines as a guest on the hit series Doctor Who.

He has played recurring roles on several series, including James on Peaky Blinders, PC Bobby Grace on Ripper Street, and Marius on the BBC mini-series adaptation of Les Misérables.

After only a year and a half of auditioning, he landed the role of Ed in the movie The Riot Club (2014), playing the role of a wealthy young Brit opposite young British stars such as Sam Claflin, Douglas Booth, and Max Irons.

He was hired for his first professional play at the Southwark Playhouse: Farragut North by Beau Willimon. That led to a role in the 2014 play Versailles by Peter Gill at the Donmar Warehouse in Covent Garden, London, and then the role of Rowland Lacy in the Royal Shakespeare Company’s production of The Shoemaker’s Holiday by Thomas Dekker in Stratford-Upon-Avon.

From 2016 to 2019, Josh played Lawrence Durell on the British comedy-drama series The Durrells in Corfu. He then took on the role of Prince Charles for seasons three and four of the hit Netflix series The Crown. For his work in season three, he shared a Screen Actors Guild Award for Outstanding Performance by an Ensemble in a Drama Series in 2020.

Josh has also starred in several hit films. In 2016, he had a bit role in the film Florence Foster Jenkins, starring Meryl Streep and Hugh Grant. A year later, Josh starred as Johnny Saxby in the British drama film God’s Own Country (2017), which premiered at the Sundance Film Festival. Josh’s portrayal won him a British Independent Film Award for Best Actor and an Empire Award for Best Male Newcomer of 2017. He won his second British Independent Film Award for his role in Only You (2018).

In August 2020, Josh was expected to return to the stage for the National Theatre’s production of Romeo & Juliet, playing play Romeo alongside Jessie Buckley as Juliet, but that has been put on hold due to the coronavirus pandemic.

Most recently, Josh was seen as Mr. Elton in the screen-adaptation of the Jane Austen classic, Emma. (2020). He also starred in the film Hope Gap (2020), which premiered at the 2019 Toronto International Film Festival and had a limited release in theaters before dropping digitally in May 2020.

Josh lives in a Victorian home near the Shoreditch and Hackney districts of London, England. He enjoys reading and drawing in his spare time. He also enjoys camping and swimming.