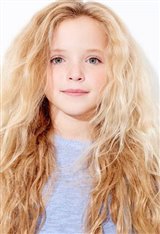 Cameron Seely started acting at age four when a family friend got her a role in a commercial.

She enjoyed the experience, so her mother found her an agent, which led to more commericals, as well as modeling for print campaigns. Her first acting role came at age eight in 2015, when she was cast as one of Jim Gaffigan's children on his sitcom, The Jim Gaffigan Show, for CBS-TV. The show ran for 23 episodes.

Towards the end of 2016, Cameron landed the plum role of Helen Barnum, P.T. Barnum's youngest daughter, in the major motion picture, The Greatest Showman (2017), starring alongside Hugh Jackman and Michelle Williams as her parents. The movie musical gave Cameron the opportunity to sing onscreen as well.

Next up, she provided the voice of Cindy-Lou Who in the new movie adaptation, Dr. Seuss' The Grinch, followed by the starring role in the TV movie Christmas Break-In (2018) alongside Danny Glover and Denise Richards.

Cameron enjoys going to school when she's not working, as well as playing ice hockey and spending time with her family and friends. An animal lover, she is concerned about saving sea animals, especially sea turtles, and would eventually like to become a marine biologist.