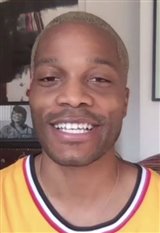 Jermaine Fowler was born in Washington, D.C., but was raised in Hyattsville, Maryland.

At the age of 20, Jermaine dropped out of college and moved to New York City to find more acting opportunities. He would frequently perform at local open mics in Time Square. In 2012, he started gaining more experience as a comedian, touring across America to perform at comedy clubs, and colleges.

He starred in Friends of People (2014-2015), a sketch comedy show on TruTV. The show lasted two seasons.

In 2017, Jermaine  produced and starred in CBS' Superior Donuts (2017-2018), playing Franco Wicks. The show’s first season was popular enough for them to cotinue with a second season, but following that, the series was cancelled in 2018. In the same year, he was named the announcer for the 69th Annual Primetime Emmy Awards, becoming the first African-American to do so.

Most recently, he gained more acclaim appearing as Mark Clark, a Black Panther member in Judas and the Black Messiah (2021). He also starred as Lavelle Junson, Akeem's illegitimate son in Coming 2 America (2021) alongside Eddie Murphy and Arsenio Hall.

Jermaine and his twin brother are the second oldest of four children. Early in his comedy career, he uploaded clips from his comedy shows on his YouTube channel, which helped him gain traction as a comedian.

He and his girlfriend Megan Heaster live in the San Fernando Valley in California with their son and daughter.

In an episode of Fast Company's podcast Creative Conversation, Jermaine opened up about his struggles after his mother's death in 2018, and the loss of his best friend the year after.

Despite his hardship, Jermaine is still going strong, with his career as an actor and comedian skyrocketing thanks to his most recent projects. ~Sean Olegario