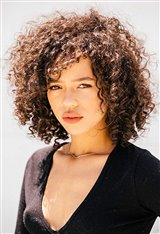 Vancouver-born Taylor Russell comes from a mixed-race family, with a black father and a white mother, so she says growing up in Vancouver, she didn't feel like she fit in. It didn't help that her family, which includes two siblings in addition to her parents, moved homes 14 times. When she moved to Toronto, where there are more black and mixed-race people, she felt more at home.

Taylor made her screen acting debut at age 18 with a bit part on the TV series Emily Owens M.D., playing "Mean Girl #1."

In 2015 she was cast in the recurring role of Emily on the TNT series Falling Skies, and was named a Rising Star at the 2015 Whistler Film Festival. However, it was her role as Judy Robinson on the Netflix reboot series Lost in Space in 2018 that made her well known to audiences.

By 2019, Taylor was starring in the thriller Escape Room as Zoey, a girl who is lured to a deadly room where she has to solve clues in an effort to survive.

In her spare time, Taylor loves to read and even started a book club on the Lost in Space set, although she admits she wound up being the only member.