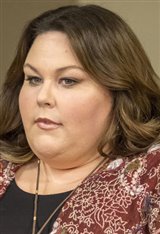 Chrissy Metz is an American actress and singer born in Homestead, Florida. Chrissy was born to Denise and Mark Metz, and spent her early years in Japan, where her father was stationed. The family later moved to Gainesville, Florida, where she attended elementary, middle, and high school. She grew up with her mother, stepfather, two siblings, two half-siblings, and her dog, Jack.

Chrissy is best known for playing Kate Pearson on the NBC drama This Is Us, for which she has earned Best Supporting Actress nominations at the Primetime Emmy Awards and Golden Globes. She shared two Screen Actors Guild Awards with the rest of the cast—one in 2018 and another in 2019 for Outstanding Performance by an Ensemble in a Drama Series.

She began her TV career in 2005 with a small role on the TV series Entourage, followed by guest appearances on shows such as My Name is Earl in 2008, Huge in 2010, and by 2014, she landed the recurring role of Ima "Barbara Wiggles" on American Horror Story: Freakshow (2014-2015). On Netflix, Chrissy played the role of Trish in the movie Sierra Burgess Is a Loser (2018).

In 2018, it was announced that Chrissy would star in Breakthrough(2019) as Joyce Smith, the mother of John, a 14-year-old boy who fell through an icy Missouri lake and was proclaimed dead. The movie, based on the memoir written by Smith herself, tells the story of how a mother's love and dedication brings her son back to life through prayer.

Chrissy is also a singer in her own band, called Chrissy and The Vapors.

Married to Martyn Eaden in 2008, Chrissy divorced in 2015. She is currently single.