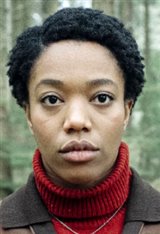 Naomi Ackie was born in London, England, the youngest of three children. She studied at the Royal Central School of Speech and Drama, graduating with a Bachelor of Arts in 2014.

In 2015 Naomi appeared in an episode of Doctor Who and in 2016, she played Anna in William Oldroyd's Lady Macbeth.

She is best known for her role as Jannah in Star Wars: The Rise of Skywalker (2019) and for her starring role as Whitney Houston in the biopic I Wanna Dance with Somebody (2022).