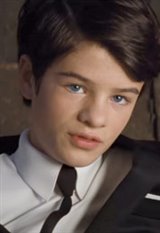 Born in Dublin, Ferdia Shaw has lived in Kilkenny, Ireland most of his life. He is currently still in school, attending the local secondary school where he learns through the Irish language.

The grandson of Robert Shaw, the legendary actor known for his roles in Jaws, A Man for All Seasons, The Sting and From Russia with Love, Ferdia has a passion for film and is a member of Young Irish Film Makers. He has made his own short films and has performed in local theater productions.

Ferdia made his onscreen debut in the Disney feature film Artemis Fowl (2020), which was intended for release in theaters but was diverted to Disney's streaming channel, Disney+, shortly after the coronavirus hit. He beat out 1,200 others for the lead role of Artemis Fowl II.

In his spare time, Ferdia enjoys reading, especially science fiction and fantasy. He is a major fan of the Star Wars franchise. He also is very passionate about the environment and climate change. He follows a vegan lifestyle as he is concerned about the ethical treatment of animals within the farming industry.

Ferdia lives with his family and dog Leia in Kilkenny, Ireland.