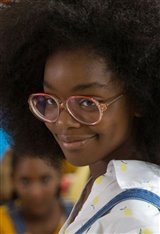 Caila Marsai Martin was born in Little Elm, Texas. When she was five, the family was at a mall when they were handed a coupon to get portraits taken. They signed Marsai up, and the little girl impressed the photographer taking the photos so much that he recommended the shots be sent to a talent agency. After three rejections, the fourth agent saw a bright future ahead for Marsai and signed her up. Marsai landed her first acting gig in a nationwide commercial for Choice Hotels and four years later, she and her family relocated to Los Angeles to further pursue her acting career.

Less than a year after arriving, Marsai landed her first credited acting gig, playing the daughter of Anthony Anderson and Tracee Ellis Ross on the ABC sitcom Black-ish. Her visibility on the series helped her land further roles, including voicework on the animated shows Goldie and Bear (2015-2016), The Mr. Peabody & Sherman Show (2016), and Elena of Avalor (2016).

That same year she landed her first film role, albeit a minor one, in the Nina Simone biopic, Nina (2016), followed by a starring role in the TV movie An American Girl Story: Melody 1963 - Love Has to Win (2016).

A year later she would add a minor role in the comedy film Fun Mom Dinner and an appearance on Netflix’s Unbreakable Kimmy Schmidt onto her resumé. Most recently she starred and executive produced her first feature length movie, Little(2019), based on an idea she pitched at age 10 to her boss, Black-ish creator Kenya Barris. Three years later, the movie was made, starring Marsai as the younger version of the role played by Regina Hall.

In 2021, Marsai voiced the role of Pru Granger in Spirit Untamedalongside Julianne Moore and Jake Gyllenhaal.

Marsai continues to star as Diane Johnson on Black-ish, which is now heading into its sixth season. She also runs the production company Genius Productions with her parents. She is called Caila by her family and friends, and only switched to Marsai when she began acting.