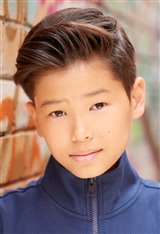 Australian actor/singer/dancer Aston Droomer began dancing at the May Downs School of Dance under the supervision of the school principal Renie Ann Martini at three years of age, learning ballet, tape, hip hop, jazz and contemporary. He has been performing on stage since the age of five in dance competitions and stage musicals.

Aston’s professional theatre experience includes The King and I, Opera Australia’s Carmen and The Bodyguard. He has also appeared in television commercials and was part of Virgin Australia Melbourne Fashion Week for RUN the Runway, a charity event supporting Kids with Cancer.

After an audition and two callbacks, Aston landed the lead role of Ezra Banks on the original TV series The InBestigators, which has had two seasons on Netflix and is anticipating a third once production can begin again following the coronavirus pandemic.

Aston also enjoys singing and is studying with a singing coach. He loves to spend his spare time with his family and friends doing various indoor and outdoor activities. He enjoys drawing and has a strong passion for car racing, dirt bike riding and mountain bike riding.