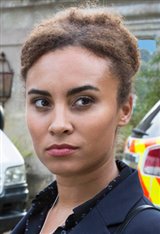 Tala Gouveia comes from a theatrical family. They moved from Nottingham to London when she was eight. Tala always wanted to follow in her parents' footsteps, and went to drama school in Bristol before she began acting in short films in 2009. In 2011, she was cast in a recurring role as Nurse Green on the popular British series EastEnders, and stayed with the show until 2013.

Tala has also appeared on stage in productions such as The Mountaintop in 2016 at the New Vic Theatre in Newcastle-under-Lyme, Staffordshire, and End of the Pier at London's Park Theatre in 2018.

Guest appearances on a number of shows followed, and in 2020, Tala was cast in a lead role as DCI Lauren McDonald on ITV's police procedural series McDonald & Dodds, which enjoyed two episodes before the pandemic hit, and is currently filming three more.