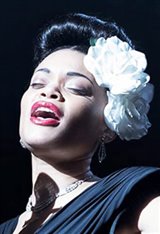 Born in Edmonds, Washington, Andra and her family moved to Southern California, where she spent most of her time in San Diego, California. Her family was religious and attended church every Sunday, where Andra began singing. Growing up, she was introduced to the music of Billie Holiday, Ella Fitzgerald and Dinah Washington, all of whom have influenced her as an artist today.

She attended the San Diego School of Creative and Performing Arts in Paradise Hills, and graduated in 2003.

After high school, Andra wanted to head towards contemporary R&B and pop, but eventually went back to classical jazz, the music of her childhood.

One day, Kai Millard Morris, who was Stevie Wonder's wife at the time, noticed Andra's talent and then introduced her to Stevie Wonder himself. Stevie later connected Andra with producer Adrian Gurvitz, who would later help her create her first album, Cheers to the Fall.

Andra has also started an acting career, appearing in two films so far. In 2017 she had a minor role of a nightclub singer in the film Marshall(2017), which starred the late Chadwick Boseman, and in the same year, she voiced the character Sweet Tea in Cars 3 (2017).

For Marshall's soundtrack, Andra recorded "Stand Up for Something," featuring Common. The song was nominated for an Academy Award for Best Original Song and a Grammy for Best Song Written for Visual Media. It was also nominated for Performance of the Year at the CMT Music Awards in 2018.

She has recently appeared in the film The United States vs. Billie Holiday (2021) as legendary jazz singer Billie Holiday. Her performance earned her a Golden Globe Award for Best Actress in a Motion Picture – Drama and her original song, written with Raphael Saadiq, titled "Tigress & Tweed" was nominated for Best Original Song. She also received an Academy Award nomination for her work in the film.

Before finding her love for music, Andra was first interested in dance, enrolling in dance lessons at the age of five, where she practiced ballet, tap, jazz, modern and even river dance.