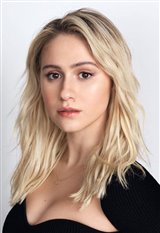 Maria was born in Burgas, Bulgaria. At around the age of five or six, she started singing and took flute lessons. She really enjoyed performing but at some point she wanted to explore more and find an escape from reality. She then turned to acting, saying in an interview with the New York Times, "Because in acting, you can become anybody. You can do everything. You can live on Mars."

In Bulgaria, she made her big screen debut in the film XIIa (2017), and then later starred in Transgression (2018), playing Yena. Her work in Transgression was the first time she was recognized for her work, earning her a Best Actress award at the 2018 Alternative Film Festival, and a nomination at the Queen Palm International Film Festival the same year.

She majored in drama theater at the National School of Arts in Burgas, and then majored in film and drama at the Krastyo Sarafov National Academy for Theatre and Film Arts in Sofia. She graduated in 2019.

While celebrating her graduation, Maria heard from a friend that there was an open call for a lead role in a Hollywood movie, which she couldn't believe at first, saying "I was like, that's not possible. We are Bulgarians. Nobody can actually see us in lead roles."

After sending out self-tapes she recorded on her phone, Maria got called for a screen test in London. To her surprise, she met Sacha Baron Cohen in London, as she was sceptical about the project at first, telling the New York Times, "The project was so confidential, I was like, 'Is this actually a project?' I was sure it was going to be a human trafficking situation. I had no idea I was going to meet Sacha — it was a surprise."

She then went on to star alongside Sacha Baron Cohen in Borat Subsequent Moviefilm (2020) as Tutar Sagdiyev, Borat's daughter. Bakalova was met with critical praise for her performance, earning her a multitude of awards and nominations for Best Supporting Actress. Among them she earned nominations from the Academy Awards, BAFTA, the Golden Globes, the Screen Actors Guild, and the Critics' Choice Awards, winning the latter. She would become the first Bulgarian actress/actor to be nominated for these awards.

Growing up, Maria was obsessed with Scandinavian cinema and the Dogme 95 movement. She was also obsessed with reading, as she was a big fan of Fyodor Dostoevsky’s work.

Actresses that have inspired her are Meryl Streep, Nicole Kidman and Natalie Portman, admiring their strength as women and the important stories they tell. ~Sean Olegario