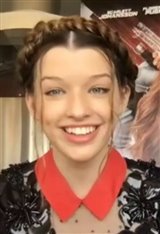 Born Ever Gabo Anderson to American actress Milla Jovovich and British director Paul W.S. Anderson, Ever Anderson grew up in Hollywood, California with her two younger sisters. She wanted to go into acting from a young age but her parents initially discouraged it.

After doing some modeling work for Vogue Italy and being photographed by Karl Lagerfeld, Michael Jansson, and Peter Lindbergh, Ever got her first break in 2016 when she was cast as the younger version of her mother's character in the sci-fi action sequel Resident Evil: The Final Chapter. The film was written and directed by her father and Ever played young Alicia Marcus.

In July 2021, Ever made her second big screen appearance in Marvel's Black Widow, as a young Natasha Romanoff, the younger version of the character played by Scarlett Johansson. She spent the first half of 2021 filming her third movie, the live-action adaptation Peter Pan & Wendy (2022) in Vancouver, playing the title role of Wendy Darling.

In her spare time, Ever practices taekwondo. She is also a big fan of old black-and-white movies and television shows.