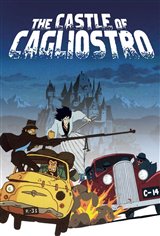 Lupin III: The Castle of Cagliostro

In this animated feature, Arsene Lupin III, the world's most daring thief, pulls off a heist at a Monte Carlo casino. But, when he discovers his haul is nothing more than a pile of counterfeit bills, Lupin traces the money to a villainous count in the small country of Cagliostro. With his trusty comrades, Lupin travels to Cagliostro, where he meets a beautiful but unhappy princess. As Lupin tries to unravel the count's secrets, he find himself drawn into a bigger mystery.